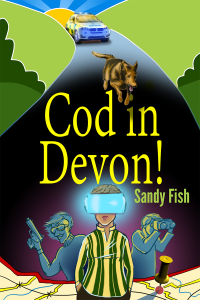 A genre busting book from local author Sandy Fish. Despite any assumptions you might want to make, “Cod in Devon!” is not about fish or fishing.

“When meticulous Janet Elliot closed the door on her life of crime, she found herself in an unfamiliar world of questionable lawfulness. All she wanted was a simple family reunion to clear the air followed by the rest of her life as a hermit, on a beach as far away from the public gaze as was humanly possible.

But from the moment she turned up late, her painstaking plan was in shreds. Forced into the public domain with a cast of unvetted strangers, Jan was out of her depth in a day she didn’t know.

Why were the police still interested in her movements? What was the French connection? And why did so much happen in a public toilet?

With a sister happily skipping along on the shifty side of the fence will Jan ever get the chance to say her piece and leave the past behind?

A light hearted family frolic through time and place and redemption.”

1 review for Cod in Devon!