Janet was already a well-established author of non-fiction books (history and genealogy) and a highly respected and in-demand speaker, as well as a 17th Century re-enactor, when she approached Blue Poppy Publishing with a view to publishing her first novel.

It was a huge pleasure to work with her on Barefoot on the Cobbles, a meticulously researched story based very closely on real events that took place in Clovelly, Devon around the end of the 19th Century and the early 20th Century. Barefoot on the Cobbles quickly established itself as a bestseller for us and is still popular two years on.

“Barefoot on the Cobbles – A Devon Tragedy” is a beutiful if sometimes gut-wrenching story. Not a romance, although there is a love story in there. Janet researched every last detail of the story via newspaper articles, court records and much more, only embellishing the real events with additional elements, particularly dialogue of course, when absolutely necessary. Order link.

Sins as Red as Scarlet

Coming in August, we are now excited to announce Janet’s second novel, Sins as Red as Scarlet, which is set in the 17th Century, a period about which Janet knows far more than most having recreated the era as part of the Torrington 1646 living history exhibition that ran for many years. Preorder link. 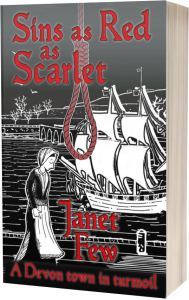 It is 1682. Across the land, the Age of Reason has begun; scientific thought is ousting superstitious belief. The menacing days of the witchfinder have all but gone. Nevertheless, in Devon’s county town, three impoverished women from Byddeforde are condemned to death for the crime of witchcraft. In Byddeforde we find the rich merchants, the flourishing tobacco warehouses and the bustle of ships setting sail for the Newfoundland cod-banks. Yet, barely hidden, are layers of intolerance and antagonism that have built up over decades. Sins as Red as Scarlet is the unfolding of the lives of those whose prejudices and fears were shaped by the turmoil of plague, of war and of religious dissent.
In an alternative 2020, sixteen-year-old Martha, herself a bullies’ target, undertakes a school local history project. Probing the motivations and beliefs of Bideford’s seventeenth century residents, Martha comes to understand how past events might lead ordinary people to become the victims, the accusers, or the accused. 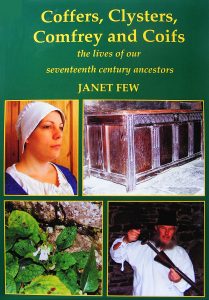 Janet Few is also a well-respected non-fiction author and we do have availability of a limited number of one of her non-fiction titles. Coffers, Clysters, Comfrey and Coifs : The Lives of our seventeenth century ancestors, is a perfect book to accompany Sins as Red as Scarlet, giving a detailed insight into the lives of our C17th ancestors.

You can find out more and order a copy here.

Janet maintains a blog The History Interpreter which she updates on a regular basis and where you can find out everything you might need to know about her various activities including opportunities to see one of her many talks.