Anne is a delightful sprightly octogenarian lady who can seemingly turn her hand to just about anything. In her autobiography, My Life on a Cliff Edge, she details how she was often sent to her room with  nothing but pens and paper for company. To this she ascribes her talent for writing and art, since she had nothing to do but draw or write.

She joined our little writing group in Ilfracombe that meets (when we are not subject to covid restrictions) at Ilfracombe library on the first Saturday of every month.  Seemingly rather timid and accompanied by her PAT dog Ellie, she quickly established herself as something of a leading light when it comes to writing, often having us in tears or chuckling with laughter, sometimes both in the same story. 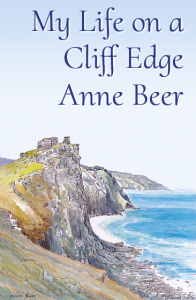 I collected together some of her handwritten stories and got them typed up. These we turned into Inspiration, a colection of short stories, which included some which were autobiographical. Anne expressed an interest in getting her life story turned into a book, adding that this was an ambition of hers to do so before her eightieth birthday (which was November 2020). Well, we did it. It took some doing because the whole thing was handwritten, which meant getting it typed up into Word first before we could even begin to edit or organise the layout. Nevertheless, I was able to give Anne the first copy of My Life on a Cliff Edge, hot off the press as it were before she turned eighty.

The cover art is one of her own paintings and the back cover shows another. The cover of Inspiration is a photograph, taken by Anne, of a determined poppy growing in the inhospitable environment of a beach.

Anne’s art has been displayed in several galleries and she has also had her writing published in anthologies like Seaglass.