Yorkshire Rebel – The Life and Times of John Lindley 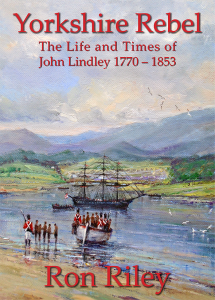 It is 200 years since the West Yorkshire Revolt of 1820 for which the ringleaders were transported to Australia on the Lady Ridley in 1821.

Although this is effectively the second edition of this book it is the first properly bound edition. It is a hardback (3mm board case bound) book with white 90gsm coated paper.

The cover art was especially commmissioned by the author  and is a painting, in oils, of the Lady Ridley, done by John R Henderson FSAA.

The book has undergone extensive additional proofing and checking for errors and includes a foreword by Huddersfield historian Alan Brooke.

The Life and Times of John Lindley is a fascinating insight into an era that has profoundly influenced our lifestyle today.
Very many aspects are explored which bring back memories of social and economic history studies. School lessons failed to bring it to life and make it meaningful. Here in contrast, the setting around a real person based on meticulous research makes the content meaningful. In many instances a subject is brought forward which is somewhat familiar, then a wealth of further information increases understanding of the issue and clarifies the extent of its impact on the people of the time, ranging from diphtheria to the Corn Laws.
The narrative is written in a clear and concise style, making it easy to follow. However, that is not to say that the events and influences are simple or easy to retain. The wide variety of investigation is evident. Each paragraph is a whole episode in itself showing a detailed study pieced together from contemporary sources.
The fact that John Lindley was a nail maker by trade is notable in that it epitomises the system of industrial process, similar to the standard example of pin making described by Adam Smith in Inquiry into the Nature and Causes of the Wealth of Nations (1776).
John Lindley’s life also demonstrates a microcosm of the era. Vast social movements that swept across the country and even the colonies and the continent affected the life of this workman. His response demonstrates the contribution of all engaged men and women in building a better society.
The main thrust of the ‘story’ is an eye opener. It transpires that a fairly major movement was underway yet nowadays it is unheard of. One wonders how far it may have been convenient for mainstream history to ‘forget’ such episodes. Although some of the events described may seem to have turned out to be fiascos, a mere sideshow in the main circus of political life of the times, yet by bringing together these various struggles this book shows that these men and women, even though they may have been trampled on by their overlords did not take things lying down. By their integrity and tenacity, by prodding and resisting, the cumulative effect has provided future generations with rights and liberties.