Ok, now I know there will be more people saying “Who?” than “Yay!” about this, but that is going to change over time until everyone knows all about Felix Whiter. If you have already read “For Cats’ Eyes Only” you can scroll down, or click here.

Who is Felix Whiter?

Created to coincide with the 2017 Summer Reading Challenge, with the theme “Animal Agents” Felix is a special agent at A.I.S. (Animal Intelligence Services) based in Beech House. He’s a cool cat who always gets his man, although Swifty the Tortoise often gives him the slip.

His boss is a white mouse called M, and her assistant is a white stag called Jonathan Hart. There is also an owl called Olli who is a few feathers short of a nest.

The series is illustrated by Amii James, an art student currently at Petroc college and going on from there to university to study illustration with a view to becoming a children’s book illustrator. 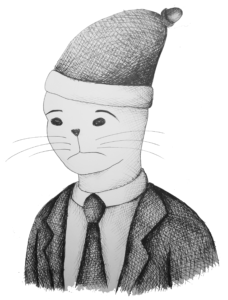 The sequel “Dr. Gnaw” is set in winter, and the animals have a tradition that dates back to one very cold winter, when the animals were all cold and hungry. One brave mouse called Chris set off to find food, accompanied by Old Father Squirrel. They were gone for 7 days and nights, but on their return they brought sacks of cheese, and nuts.

Every winter, the animals remember, by exchanging gifts, and eating good food, and they all wish each other a Happy Chris-Mouse and dress up as old father squirrel in his acorn hat; although Felix isn’t really all that keen on it.

Felix has a new partner; a spaniel called Holly, and he has to get over his dislike of dogs. He and Holly get invited to a posh party at the Akita-Shibu Bank. Felix goes under an assumed name; John McClaw, but soon he is fighting for his life, and Holly’s too when a gang of villains, led by Hans the Rat, take everyone hostage, and try to rob the bank.

If the plot sounds familiar, you should see some of the jokes! Blue Poppy Publishing would like any film companies, or 1970s comedy double acts to send writs, in the first instance, to our contact email. We don’t have any money, but the publicity of a court case could well change that.