This is the hardcover first edition. We are down to the last few copies. When it’s gone it’s gone. You can still buy the softback edition here. 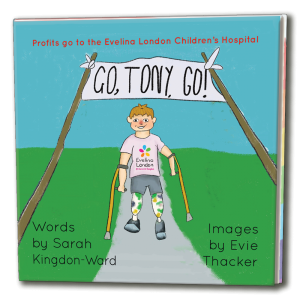 Inspired by Tony Hudgell, a five-year-old hero, this is a charming and positive hardcover picture book for preschool aged children.

A bit of background, in case you don’t know the story.

Tony was just 41 days old when he was admitted to hospital for treatment to his legs. He had been very badly treated by his birth parents who later went to prison. His adoptive parents have given him the utmost love and encouragement and despite having to have both his legs surgically removed, he has never allowed this to deter him from making the most of his life.

Tony wants you to see the ability, not the disability. Inspired by the exploits of Captain Tom Moore, Tony decided that he would also do a 10km sponsored walk to raise £500 for the hospital that cared for him, the Evelina London, Children’s Hospital.

Tony finished his walk ahead of time, and he also raised a bit more than £500. In fact the total is somewhere near one-and-a-half million pounds as I write this.

Tony’s determination and positivity inspired former teacher Sarah Kingdon-Ward to write a children’s picture book about Tony, and to fill it with positivity. She engaged a young artist, 13 year-old Evie Thacker to do the illustrations which are very vibrant and cheerful.

Profits from the sale of this book will go to the Evelina London, Children’s Hospital which is part of the Guys & St Thomas’ Hospital NHS trust. to help give vital care to more children like Tony.