This series of (currently) four books is aimed at young readers around 10-12 years as an entertaining complement to school history. It aims to slip genuine historical facts into an otherwise entertaining fictional story.

Ten year old David Johnson doesn’t really enjoy school much. He gets bored, especially in history lessons. Then events take an unexpected turn and David finds himself travelling back in time and coming face to face with a real Roman boy. As the tale unfolds he finds he is able to help his new friend out of a difficult situation and in return he gets a bit of a boost with his own school work.

With a focus on everyday life in Roman Britain, aimed at Keystage 2 level history

As the title suggests, David finds himself returning to Londinium in this sequel to the first story. But time has moved on and now his friend is an old man. Yet still David is able to help his friend out of a difficult situation, as well as helping some archaeologists in the present day to get access to a dig site.

Time Tunnel at the Seaside 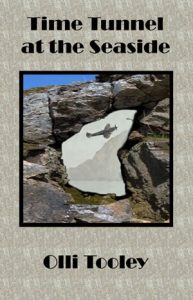 It is the summer holiday, and David is joined by his older cousin, Sarah. He doesn’t like her because she is very competitive and a bit bossy, but when they find themselves back in time it is her quick thinking which saves them from a sticky situation.
Eventually the two manage to help out a young lad from the past who has a lot more connection to them than they had at first realised.

Looking World War II, and in particular the plight of evacuee children. Watch out for Winston Churchill and Hitler in a highly improbable “dogfight” over the Devon cliffs.

Back in school and in his last term of Juniors, David makes a new friend who is Dutch and also has undiagnosed Autism. As well as taking the pair on a historical time travel journey to Anglo-Saxon Britain; “Time Tunnel to West Leighton” explores low level bullying and disability (specifically Aspergers and Autistic Spectrum Condition) in a story which will entertain and excite young minds.

Each book is deliberately written to try and encourage young readers to find out more when they have finished. There is a section of notes at the end of each book explaining some things which may not have been obvious in the text.

It is hoped that at least some children will take the concepts explored and use them to do their own research.

Something for the parents

All the Time Tunnel books have been written to appeal to a broad age range. Feedback suggests that most adults get as much pleasure out of reading them as children, although they are fairly short.

As well as being worthwhile to read, there is also a little secret in each book hidden in plain view. Depending on your interests you may spot it immediately or have to have it pointed out. In the first two books this is only in the chapter titles, but in the latter books these “easter eggs” are hidden throughout the text as well. Have fun searching